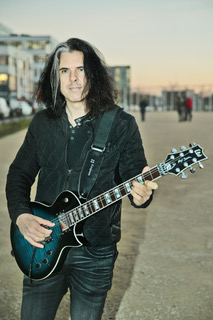 Inducted October 27, 2019, Alex Skolnick is both an original member of Testament and a respected New
York improviser of multiple styles. Emerging as one of the original melodic thrash guitarists, he has gone on to release several critically acclaimed albums with the Alex Skolnick Trio, In 2005, he reunited with Testament, the impact of which has eclipsed the band’s initial run, including being featured on Slayer’s recent farewell tour. As a writer, Alex has been a contributor to UNBUILT (a biannual lifestyle and
cultural magazine that included fellow “metal intellectual,” D Randall Blythe -vocalist of Lamb of God). He has also written for The Talkhouse, Guitar World, Guitar Player and other publications. Whether carefully listening and playing alongside improvising instrumentalists or loudly shredding with Testament or Metal Allegiance, it’s safe to say that Skolnick has found his own niche as a guitarist.