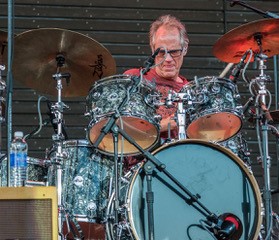 Inducted October 27, 2019, Burleigh Drummond, born 9-25-51, grew up as an Army brat on military bases around the world, most notably four years in Ankara, Turkey. The enchantment with drumming began here and still runs rampant through his system. Burleigh was a founding member of Ambrosia in 1970 and has also performed-recorded- produced with Alan Parsons, The Lost Dogs, Player, Bill Champlin, Mighty Mo Rodgers, Michael McDonald etc. To date Burleigh and his wife and musical partner Mary Harris have recorded three albums of their own group Tin Drum and produced over 200 albums for other artists.