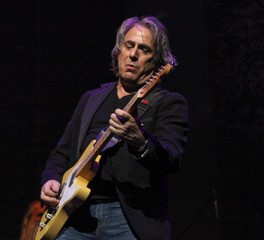 Inducted October 27, 2019, Danny Kortchmar’s resume reads like a Who’s Who of the music industry. A renown guitarist, producer, songwriter and session musician, Kortchmar has played, produced and written for James Taylor, Don Henley, Carole King, Linda Ronstadt, Jackson Browne, and many more. As a songwriter, Kortchmar has either written alone or collaborated with numerous artists and has penned such indelible tracks like Don Henley’s “Dirty Laundry,” “All She Wants to Do Is Dance” and “New York Minute,” as well as Jackson Browne’s “Somebody’s Baby” and “Shaky Town,” to name a few. In the 1970’s and 1980’s, Kortchmar was a member of The Section, best known for both their  work in support of some of the top selling singer/songwriters and solo singers in the history of music. Together,  Recently, Kortchmar put members of The Section back together again and they now perform regularly live around the world as The Immediate Family.