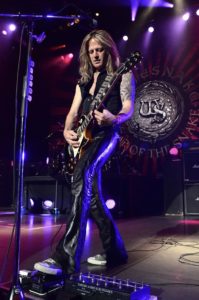 From Whitesnake to Burning Rain, Doug Aldrich is one of the hottest guitar players to emerge from the hard rock scene of the 80s and 90s.

Aldrich was first introduced to the guitar at age 11 when his sister Jennifer introduced him to the playing of Jeff Beck. Aldrich’s first guitar was a Les Paul model and came from Sears. Aldrich auditioned for Kiss. He did not get the gig but as a result of the audition he met Gene Simmons and he and Gene are friends to this day. Aldrich was also once a highly sought after guitar teacher, at one point he was teaching over 70 students a week. In early 2014 Aldrich joined the critically acclaimed production show “Raiding the Rock Vault” at the Las Vegas Hotel where he performs five shows a week with other Rock’n Roll greats like Robin McAuley (formerly Survivor, MSG), John Payne (Asia), Howard Leese (Bad Company, Heart), Paul Shortino (Quiet Riot), Andrew Freeman (Offspring) and more.