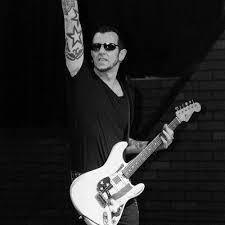 Inducted October 26, 2017, Gary Hoey Has crafted an incredible career releasing 20 albums in styles from Rock, Surf, Blues, Holiday and Soundtracks. Hoey moved to Los Angeles in 1987 after an audition with Ozzy Osbourne inspired the Boston native to move out West. In 1993 he launched his career with a Top 5 hit cover of “Hocus Pocus” by Focus for Warner Bros. His popular Ho! Ho! Hoey series of Christmas CDs have become a tradition at hundreds of rock radio stations. He has toured with guitar legends, Jeff Beck, Ted Nugent, Brian May, and Joe Satriani. His latest album “Dust & Bones” on Provogue/Mascot Label, is an exuberant fusion of Blues and Rock.