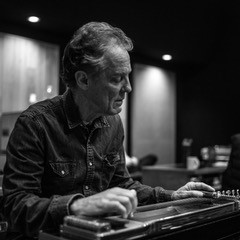 Inducted October 27, 2019, Greg Leisz is a Southern California-based multi-instrumentalist, songwriter and producer. He has worked as a touring and recording musician with many of the best known artists in the music world. He plays guitar, pedal steel, lap steel, mandolin and banjo.

Eric Clapton, Joni Mitchell, John Mayer, Bruce Springsteen, Eagles, Joe Cocker, David Crosby, Bill Frisell, Bonnie Raitt and Robert Plant are a few of the artists with whom he has recorded and performed.

He is currently touring and recording with Jackson Browne and is a member of the group Charles Lloyd and the Marvels.

He appeared on back to back Grammy award winning albums of the year in 2014 (Daft Punk’s “Random Access Memories”) and in 2015 (Beck’s “Morning Phase”).

The Americana Music Association awarded Leisz a Lifetime Achievement Award in 2010. He was awarded a Grammy in 2011for his work with Ray LaMontagne and the Pariah Dogs on the album “God Willing & The Creek Don’t Rise”