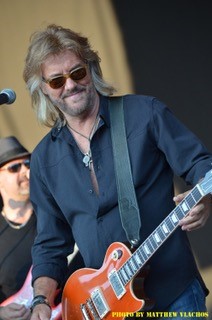 Inducted October 27, 2019, Peter Beckett and J.C. Crowley met each other at a Hollywood Party in early 1977. Beckett was a rock musician from Liverpool & Crowley was a country singer from Texas. Within a week, they started writing songs together. A short time later, they enlisted the help of Ronn Moss on bass and John Friesen on drums and Player was born.

Player enjoyed success following their number one single “Baby Come Back” which was written by Beckett and Crowley and sung by Beckett. Their second single “This Time I’m In It For Love” reached #10. Eventually J.C. Crowley & Ronn Moss. Beckett continued to write and produce several more albums as Player.  Concurrently, he spent 9 years touring with Little River Band as a song-writer, vocalist &  rhythm guitarist.

Peter Beckett is still going strong, both as a solo artist touring with many other classic 70’s bands and with his own band.