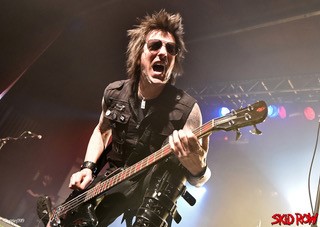 Inducted October 27, 2019, Rachel Bolan is the co-founder and songwriter for the band SKID ROW.

Rachel realized that he wanted to be a performer at a very young age when he went to see Liberace with his parents and Grandmother. “I was only 5 years old, but was taken aback by the energy that filled the venue” Rachel said. It was after that moment he began listening to all the records that his brother and sisters owned. The first record he purchased was The Rolling Stones – Sticky Fingers. It changed his life. After that he was turned on to the likes of Alice Cooper, Kiss, Sex Pistols and Ramones to name a few.

His first gig was in 1978 at Manasquan high school in Manasquan, NJ. In 1986 Rachel met Snake and the rest is history. Outside of Skid Row, Rachel produces other bands and writes songs for other artists, sports teams and with Snake writes music for ESPN.