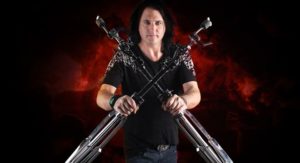 Scot Coogan is an American musician known for his accomplished drumming and vocal skills, working as both a session and touring musician. Scot resides in Las Vegas, Nevada, where he records, performs and has worked as a counselor at Rock and Roll Fantasy Camp. Scot is also related to Jackie Coogan who is responsible for the Coogan Act that was put into place in 1939.

Coogan is currently the drummer in the Tracii Guns and Phil Lewis version of L.A. Guns.